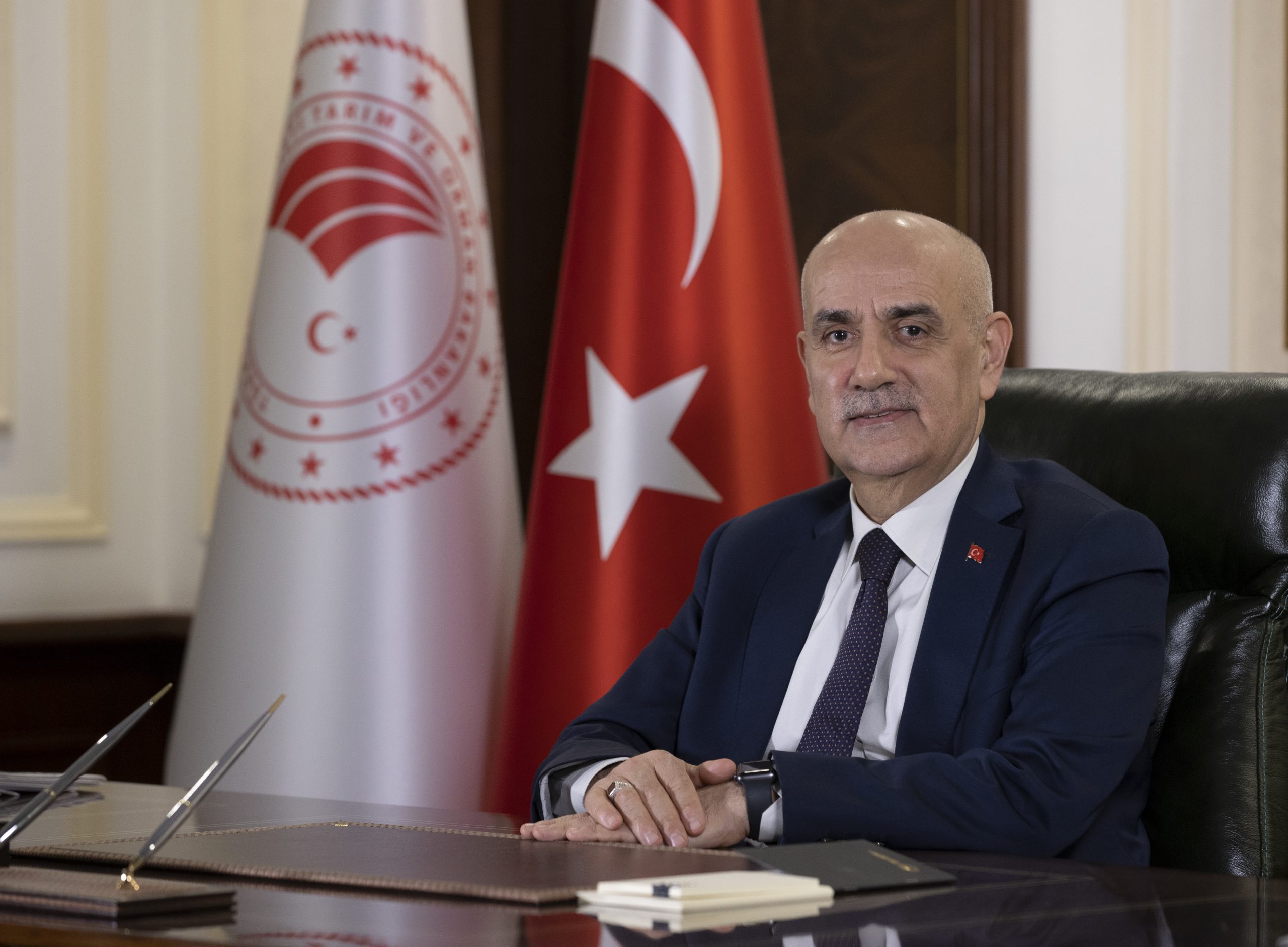 Saying that Türkiye has grown and developed in every field such as plant production, animal husbandry, agricultural output, export, and so on, Prof. Dr. Kirişçi, Minister of Agriculture and Forestry of the Republic of Türkiye, stated that production will continue in the lands of our country for many strategic agricultural and food products, especially wheat.Emphasizing that R&D activities to serve as a model for the world in agriculture have started, Kirişçi answered our questions for Business Diplomacy readers.

Since the first outbreak of the pandemic on a global scale, the process has been carefully followed by our Ministry, and measures have been taken to minimize its effects on our country and to meet the food needs of our nation without no interruption whatsoever. In this challenging process we experience, while most countries have difficulties in accessing food, we have not had any problems in agricultural production and food supply chain thanks to the measures we have taken as a country.

In 2020, despite the pandemic, the agricultural sector kept growing and developing in all areas such as plant production, animal husbandry, agricultural output, exports, and so on.

By initiating a summer planting program to ensure sustainability in plant production, we provided our producers with seeds with a 75% grant in areas where the agricultural calendar allowed, and ensured the planting of strategically important plants with a shortage of supply in particular.

With its 23.4 million hectares of cultivated agricultural land, Türkiye maintains its position as the 1st agricultural country in Europe by increasing its agricultural production day by day and by exporting as well as meeting the nutritional needs of the country’s population reaching 85 million. Our global leadership in many agricultural products is maintained with the activities carried out by our Ministry and the incentives for production.

According to the United Nations Food and Agricultural Organization (FAO) 2020 data;

According to the long-term average, our country is the world leader in the production of dried figs, raisins, and dried apricots.

Our country is the world leader in hazelnut, quince, cherry, fig, and apricot production, second in the world in chickpea, melon, watermelon, sour cherry, cucumber, leek, and carob production, and third in mandarin, apple, and tomato production.

Being one of the top 10 agricultural countries around the world, Türkiye is a net exporter with USD 25 billion of agricultural and food products, as well as meeting the food needs of the country’s population that keeps increasing day by day through the strong agricultural infrastructure it employs.

As in the grain market, Türkiye is one of the most significant countries in the legumes market. In 2021, the production record of all time was broken through the production of 305 thousand tons of white beans in our country. Our country ranks 2nd in worldwide chickpea production and 4th in lentil production.

Crises such as the Covid-19 pandemic, climate change, and regional wars have a significant impact on the global agriculture and food sector. These developments in the current period are closely followed by our Ministry, and all necessary measures are taken to ensure that both our producers and consumers are not adversely affected.

The agricultural support budget, which was TRY 1.8 billion in 2002, increased every year and reached TRY 29 billion in 2022. The share allocated to plant production support in 2022 amounted to TRY 17.3 billion.

In order not to adversely affect our farmers in the face of increasing fertilizer prices due to fluctuations in global commodity markets and to ensure that agricultural production continues without any interruption, the existing fertilizer supports were increased by 100% in 2021 to cover the products for the year 2020.

In order to contribute to meeting the increasing input costs due to the developments in the global commodity markets, additional input support of TRY 3.2 billion with TRY 50 per decare was paid in 2022 to the strategically important wheat, barley, rye, oat, and triticale producers in addition to the existing supports. A total of TRY 116 per decare was paid for diesel, fertilizer, certified seeds, and additional input support. Thus, the input support to be paid to our grain producers in 2022 increased by 127% in total compared to the previous year.

Thankfully, many strategic products, especially wheat, as well as agricultural and food products that our people need, continue to be produced in these lands.

Also, animal husbandry, which is one of the most significant issues for our country, has special importance in terms of its contribution to the economy as well as providing the foodstuffs that our people need for a healthy and balanced diet. As a result of the economic development in our country, both the domestic demand and the utilization of foreign market opportunities have made it necessary to increase animal production.

During the Covid-19 pandemic, meat, milk, poultry, egg, and beekeeping sector representatives were informed via video conference within the scope of the measures taken on the sustainability of production, hygiene measures to be taken, supply security, access to raw materials, and price stability.

Necessary measures have also been taken to exempt people working in the sector from the curfew in order to prevent any disruption in the production, distribution, and placing on the market of animal products.

Since 2019, when the pandemic started in our country;

Also, in this process;

In addition to the negative effects of climate change, which we have recently started to feel more, it is expected that the world will face a situation such as insufficient natural resources necessary to feed the increasing population. At this point, R&D and innovation studies stand out. Based on this, our ministry has started R&D studies that can serve as a model for the world in order to develop smart agricultural technologies.

In this context, a comprehensive National E-Agriculture Strategy has been prepared for the 2021-2025 period in order to analyze the current state of digitalization and accelerate the necessary technological transformations in e-farming through a comprehensive roadmap.

E-Agriculture Portal was put into service with the close follow-up of technological developments. I would like to give brief information about the E-Agriculture Portal, which enables farmers, citizens, and the private sector to do business and transactions via computers, tablets, IOS and Android-based mobile phones without going to provincial and district directorates in person. Approximately 140 public services can be performed through the system. In this portal, citizens can report their complaints and follow up on their applications, and farmers can access summarized information about agricultural activities, including the determination of the closest fertilizer and pesticide dealers and licensed warehouses, through the system.

Also, we performed a study in order to contribute to the sustainable agricultural food chain, increase the marketing opportunities of the producers and facilitate the access of the consumers to quality products at a reasonable price. We developed the Digital Agriculture Market that we call DITAP, which includes a wide range of members from small-scale farmers to large-scale members in the retail sector along the entire food supply chain from farm to fork.

In addition, we keep working on projects such as the Animal Tracking System (e-HTS) Project, Technology Development for Reducing Harvest and Post-Harvest Losses, Cloud Based Yield Monitoring, Farm Management System, Precision Agriculture Applications Based on Image Processing through Unmanned Aerial Vehicles, especially the Project for the Development of the Mapping and Tracking System (for Combine Harvesters Used in Our Country), Unmanned Small-scale Agricultural Spraying Helicopter, and Country Soil Information System.

Extending smart agriculture practices is one of the prominent areas in the field of international cooperation in the agricultural sector. Following the smart agriculture practices, transformation for sustainable food systems management from farm to fork, reduction of food waste and losses, production of biogas energy from agricultural waste and animal manure, and use of renewable energy sources for irrigation and food production also notably stand out.

The following issues have been determined as areas of cooperation:

As can be seen, the development of Specialized Organized Industrial Zones Based on Agriculture is one of the areas of cooperation. Cooperation agreement in the field of agriculture has been signed with 75 countries so far and is under negotiation with 18 countries.

Entrepreneurship and Start-up Ecosystem in Türkiye

Digitalization in logistics: Why is it important?

A financial services field awaits us, where great changes will occur through the integration of digital currencies into international payment systems 22 Crypto assets...
Read More