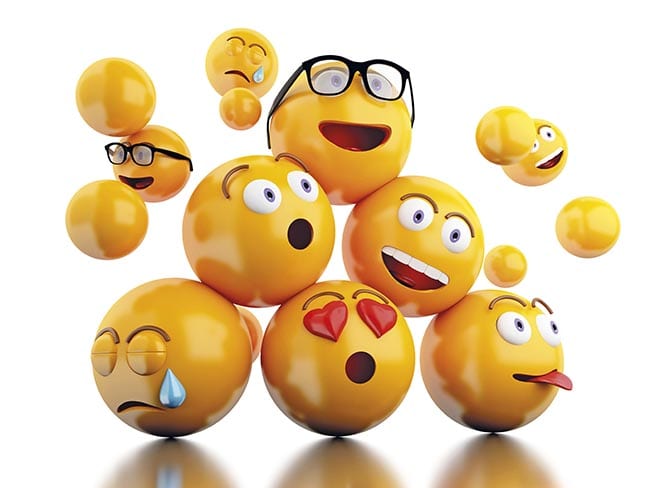 Using emojis in our statements, we can create message texts expressing our feelings in the best way. So, do they help us or make our thoughts lazy?

Although written communication is included in the historical development of human beings much later, it is an indispensable part of the modern people’s life today. All remarkable things such as permanent recording of information, recording doings that shouldn’t be forgotten, leaving a note for the person who is away from his/her desk at that moment, embodying thoughts and inspirations, applying to official institutions have been proceeding via writing since the invention of writing. Being able to communicate with our relatives and friends who live far away from us is one of the most important positive values that written communication brings to our lives. Yes, we cannot deny the role of writing in the evolution of mankind continuing for centuries. However, we won’t handle the historical development process of human beings in this article, but the point where the writing, which illuminates this process, comes today.

After the technological devices have been included in daily life, geographical distances aren’t as critical as they once were. At this precise point, Graham Bell, who made his name unforgettable with his great invention, shouldn’t be ignored. During that period, telephone was a considerable leap for people who were still surprised by telegraph technology although it had been invented 40 years ago. The fact that two people who aren’t in the same place can hear each other’s voice through cables… It still sounds strange even today. As a result of this development, oral communication managed to get ahead of writing for a while. However, even the technology advancing enough to enable us to see a person at the far end of the world in three dimensions couldn’t decrease the effect of expression of “Verba volant, scripta manent”.

Oral communication is an action that you should focus completely on the other person, even if you aren’t physically in the same environment with the person you are talking to. You should realize every word immediately and then give instant feedback. But, unfortunately, this is no longer an action that modern people can take, especially in telephone communications. Let’s face it, it seems impossible to have to talk and listen continuously while you’re busy with a lot of things at the same time. So, while we use e-mail to communicate each other in our business life, we communicate through messaging applications in our personal life. Therefore, both parties can reply to the incoming mail or message when they have convenient time.

No matter how much we praise the written language since the beginning of our text, we should accept that written language is a means of communication, which comprises of more serious and strict rules than oral communication. Additionally, lack of gestures and facial expression in written language can often cause that the matter is conveyed more negatively. For this reason, it is possible to say that most of us are misunderstood by the other person at least one time. Fortunately, messaging applications brought to our lives a simple but revolutionary innovation that will make our lives easier: emojis…

DOZENS OF EMOJIS FOR AN EMOTION

Since the earliest times when pens replaced by keyboards, punctuation marks and some letters had been very useful for us to express certain facial expressions with a function other than their main function. Colon, semicolon, parentheses, the letters of D, S, x and more produced by creative minds became our smiling faces, sorrows and worries. After seeing the colourful emojis, those expressions, which we once again realized how limited they were, faded away and already blurred in our memories. Now, when words with many strokes become inefficacious, we can easily express our thoughts to the other person using an emoji taking only one character in the text box. In fact, we don’t even think of using symbols under normal circumstances; however, we can form message texts that express our feelings in the best way by choosing many symbols from the list and adding them to our sentences.

You may have come across witty posts on social media such as “Isn’t there an emoji for this?” or “Okay, now an emoji should be created for this.” We read such posts with pleasure because they interpret the agenda mischievously. However, are we aware that emojis are beginning to replace our emotions following our sentences, and even that emojis are getting included in our spoken language? Therefore, even if its accuracy is controversial, we need to use emojis as little as possible, unless it’s necessary.

The most important source of Rwanda which is a small national territory is a good business environment that it offered with its manpower, safety...
Read More

Our Place in The Value Chain Will Be Strengthened