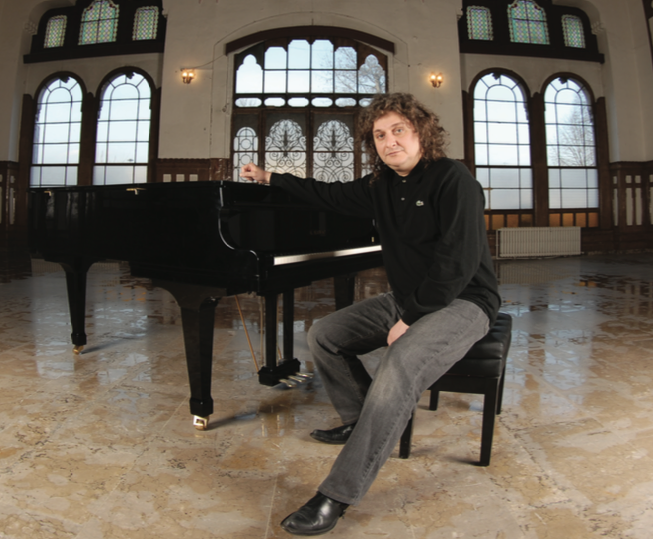 Music has a special place among fine arts by touching all people’s souls passing the language barrier and borders of its area and reflecting the emotions of its composer as touching the listener’s heart. We talked with valuable artist Tuluyhan Uğurlu, who sees music as a philoso­phy of life and has led the way for many things in Turkish music with his successful compositions and authentic stance, about his career and the universality of the music.

Considering that your mother is a musician and your father is a poet, we can say that you grew up in a house full of art. How do you think this affected your personality and artistic life?

In the home that I have spent my childhood, my mother played piano and my father was listening to every kind of music with respect. Because my father is a poet and a word-maker, many valuable artists cost the earth and Turkey were always coming to our house. For all my childhood, I have witnessed their conversations. I could be raised by a family filled with people who do not have any interest in art even though I have the gift. But, along with my interest and talent in piano, I grew up in an environment which filled with people who understand music and this provided an important advantage to me. As a person who has artist parents, my responsibility increases of course. As you know, you have to be worth to grow in such a rich environment. In this exact point, the important thing is your competition with yourself. If you don’t quit this fight, first your family, then your circle, and then the society and the world starts to be proud of you. This is a cycle and a whole.

If you are playing the piano, you have to get an education and know about Beethoven, Mozart, and Chopin. Because in fact every one of them is a school himself. And to enter these schools you must get a conservatory education. But after some time, this fails to satisfy. Let me explain: There is no person in the world that can play a piece of Mozart better than him. When you render a piece by Mozart, you will never be number one, you can be second at best. For instance, no one can know the mood of Beethoven or what affects him when he is composing one of his pieces. Therefore, the piece that you play at your best will be your own piece. At this juncture, I would like to say that I use Anatolia as a basis in my pieces. I do the work that I know, but I present this by turning it something international. You can turn to originality only after the moment that coming to the point of performing on the stage for 90 minutes. Playing Beethoven, Mozart or Bach improves your technique and this helps you when you are composing. You will be free from the moment that you started playing every piece. But the thing that I most like is create to something from zero. Also, I really like making a reference to today from history. I enjoy building bridges between past and today, take lessons and present these outcomes to the audience in both visual and musical sense.

Do you consider playing an existing piece and composing a new piece as different abilities, or one must consider those two as a whole?

An artist does not have to do both. For example, Beethov­en never felt this obligation and always played his own pieces. As of the 20th century, Western music market has been created. And yes, of course, Western music is very important, but it is not enough its own. Consequently, you do not play a piece in a different form in classical music. Because you have to play the piece by considering the rules of that particular period. Academy draws the lines for you and you can only move in it. You cannot play Mozart or Beethoven pieces as you wish. You have to play with the artist’s rules. There can be some parts in pieces that you can interpret, but these are limited also.

If we want to be civil, we must know Mozart and Chopin but on the other hand, we must try to make our own way. It is like Rumi said: “Everything about yesterday has gone with yesterday. Today, it is needed to say new things.”

In Symphony Turk, you brought something new in Turkish Classical Music by using Turkish musical instruments and piano together. And you started giving your concerts in historical places and this is a first also. How did you come to this point?

I think that one should not bore the listeners. There are man­ners in a concert hall that you should follow. Even coughing is not allowed and you should not exaggerate bowing. We are in the 21st century, there should be no such restrictions anymore. If the artist wants he can be able to exaggerate the bow or the listener can be able to express his feeling with the person next to him during the concert. For example, I take a really long bow on the stage and I recommend this to the young ones who want to do this from the heart. I say to them: “ Bow to the sides, you get calm while you’re bowing to sides”. Bowing is beautiful; it means peace, it means Islam. If you increase the bow, the aggression will definitely decrease. With these reasons, I wanted to move my concerts out of the concert halls. And it was a first for me to give concerts in Mount Nemrut, Cathedral of the Holy Cross, Hittite Hattusa or Piazza San Marco. In my concerts in Europe during the 1990s, I have used space images, and this was a first for me also. During the concert, the images were flowing. Space means infinity. And our infinity is in our hearts and music is the most beautiful guide for that road. Because the music changes time and place. For example, if you hear reed flute in the cafe that you sit you consider that place differently; if you hear techno music you consider there differently. Music is the biggest guide on shining the mirror of a person’s heart.

Music carries the very soul of the place that it played as well as being universal. For example, every corner of Anatolia has different tunes and instruments. How do you define an artist’s journey for being universal if he grew up with the culture of the land he was born?

A person should make the music of his own age. Therefore, classical music should be performed to a certain extent. Now you have to say goodbye to history. You have to both make your own music and reflect modern images to your art. Only then you can build a bridge from local to univer­sal. End-blown flute, reed flute, tamboura with piano and a symphony orchestra in the back… East and West are together… Then you affect the young ones. Also, I would like to state this, a person’s true worth is appreciated by those who know him well. For example, if you ask “Is Neşet Ertaş local or universal?” the result is this: He is both local and universal. Maybe the people from around the world do not know him, but his messages are universal.

You were the student of Cemal Reşit Rey who is known as the composer of Tenth Anniversary March of the Republic and The Luxurious Life Operetta. Did he give you any advice? And what you would like to say to the generation after you?

It essential that the person should have a musical soul, raise in a conscious environment, and get an education. My deceased teacher Cemal Reşit Rey always has said: “Music is a pyramid and there is only a place for one on the top.” And there, it is very important to reach that one person place and deserve there. My most important advice for young people is: Be yourself.

Cemal Reşit Rey is one of the people who is close to the public among our modern composers. He was always saying: “Four walls, God, you, and piano”. And if you focus like that, your excitement decreases and concentration increases. You have to be yourself at that moment even though you are surrounded by millions of people. And that is to say: Musicianship is not a job, it is a lifestyle and a philosophy of life. If you look it that way, you do not feel tiredness at all. If you consider music as a job and see it as a meal ticket, then music can become tiring for you.

The Pacific Allience in it's Eighth-Year