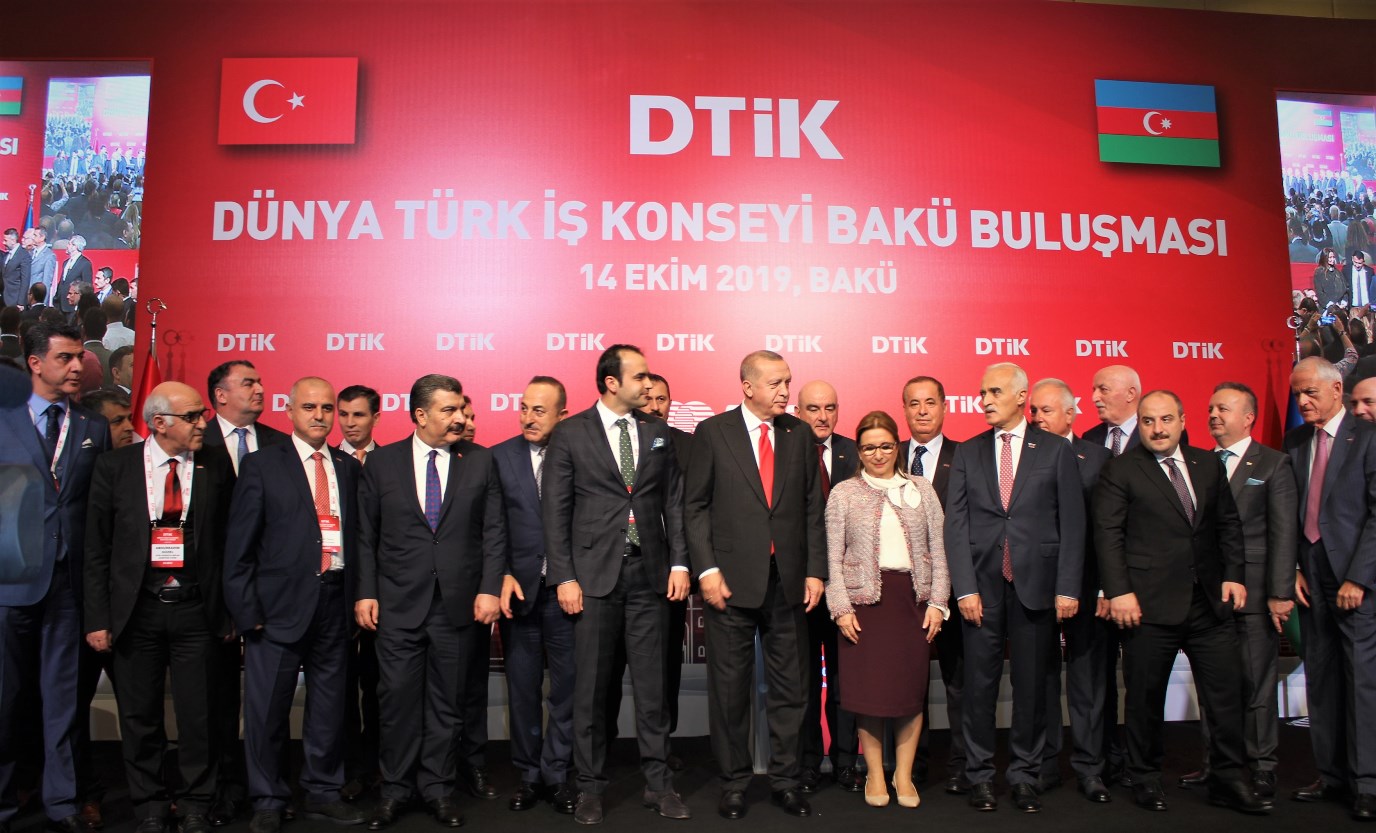 The DTİK Baku Meeting, organized by the DTİK with the aim to strengthen the Turkish diaspora with the help of Turks and friends of Turkey living abroad, took place on October 14, 2019

The “DTİK Baku meeting”, organized by the World Turkish Business Council (DTİK), hosted by DEİK-DTİK President Nail Olpak and DTİK Eurasia Reginal Committee President Ali Galip Savaşır took place with the participation of President of the Republic of Turkey Recep Tayyip Erdoğan, Minister of Trade Ruhsar Pekcan, Minister of Foreign Affairs Mevlüt Çavuşoğlu, Minister of Industry and Technology Mustafa Varank and Minister of Health Fahrettin Koca. President Erdoğan emphasized in his speech the “two states and one nation” fact and said, “Like Azerbaijan we also have never seen Kazakhstan, Kyrgyzstan, Uzbekistan and Turkmenistan apart from us. I hope that this meeting will further rivet the ties of brotherhood between us.”

OUR BUSINESS PEOPLE ARE THE FIGHTERS OF OUR ECONOMIC RELATIONS

Erdoğan thanked DEİK and DTİK for their Baku program and said that he hopes that this meeting will help increasing economic and commercial relations in the Turkish world. Erdoğan said that we live in a time where borders and distances lost their meaning and that the whole world transformed into a small village. He further emphasized that concurrently with globalization, the regional cooperation has gained increased importance in global politics and economy and said: “This is the only way the potential of the 300 million Turkish world can be activated with its full potential. We have made great progress in using this potential compared to 15-20 years ago. However, any project in which the business world does not play the role of the locomotive is bound to remain incomplete. Because our business people are the fighters of the economic relations. As long as political and cultural relations are supported by commercial collaborations, they gain resistance to crises.”

DTİK IS A MEETING POINT FOR TURKS LIVING ABROAD

Recep Tayyip Erdoğan noted that DTİK is another important project aiming to realize the economic and commercial potential of Turkish diaspora and said that a Turkish society, which is economically developed and strengthened in the system of the country in which they live, will contribute more to the homeland. Erdogan stated that DTIK is a reference and meeting point for all Turks living abroad regardless of their country and origin and said: “This roof is a structure, where the homeland stands in the center, ready to embrace everyone. We do not see the DTİK as competitor of other Turkish associations and organizations in our country but as a platform supporting them. “I invite all our entrepreneurs living abroad to become a member of DTİK”

Erdoğan: “I invite all our entrepreneurs living abroad to become a member of DTİK”

DIASPORA MAY BE A BRAIN GAIN

DEİK and DTİK President Nail Olpak, who referred to the close relations with Azerbaijan, said: “We know that if we would experience difficulties, Azerbaijan would embrace us as brother. We will always be ready for all kinds of help. We have to pass this brotherhood from generation to generation and always keep the slogan “one nation, two states” in mind.” Olpak stated that they did not become brothers with Azerbaijan due to the business relations but that they do business with them because they are brothers and continued as follows: “As business representatives, we will make more efforts to increase our economic cooperation. Our powerful diaspora spread around the world is an important gain for us. Our country is one of the few that embraces its diaspora. The fact that our President is here at a DTİK program, held abroad, is an important indicator for that. If the diaspora can be evaluated well, we can describe it not as a “brain drain” but as “brain gain”. In order for a brain drain to become a gain, a healthy organization is required among the members. And exactly for this reason we have founded the DTİK 12 years ago.”

WE HAVE TO MAKE THE DTİK MORE ACTIVE WORLDWIDE

Olpak stated that regardless of the political view and social life, the DTİK aims at bringing together everyone on this platform, who loves our beautiful country and who works for its development, he said: “The goal of the DTİK is to contribute to the economic, social and cultural development of the Turkish diaspora. So how can a Turk in Malaysia and a Turk in the Netherlands work together? How can a Turk in France and a Turk in Russia cooperate socially or culturally? How can a Turk in Australia cooperate with a Turk in Nigeria, in terms of sports or academically? Our aim is to prepare and support the infrastructure and platform. Let us first become more powerful in the DTİK together with our Azerbaijani brothers. Let us make our diaspora and the DTİK more active all around the world.” After the opening speeches, the meeting continued with the “Turkish Diaspora in Global Public Diplomacy” session, moderated by Member of the Executive Committee of the World Turkish Business Council Rona Yırcalı and the participation of Ambassador to Moscow Mehmet Samsar, Ambassador to Tbilisi Ceren Yazgan and Ambassador to Nur-Sultan Nevzat Uyanık. The “One Nation cannot have Two Diasporas” session was moderated by DTİK Member of the Executive Committee Halim Mete and the participation of Turkey-Azerbaijan Inter-Parliamentary Friendship Group President Şamil Ayrım and Assoc Prof. Dr. Telman Nusretoğlu.

Best Transformer, the Powerful Brand of the Middle East and the Gulf

BEST Transformer, one of the world’s leading companies in the field of transformer production and diversity, increases its market share in the Middle East...
Read More

This is Our Mission

I care deeply about DEİK and its special- purpose business council DTİK, and I would like to invite everyone to get to work for...
Read More