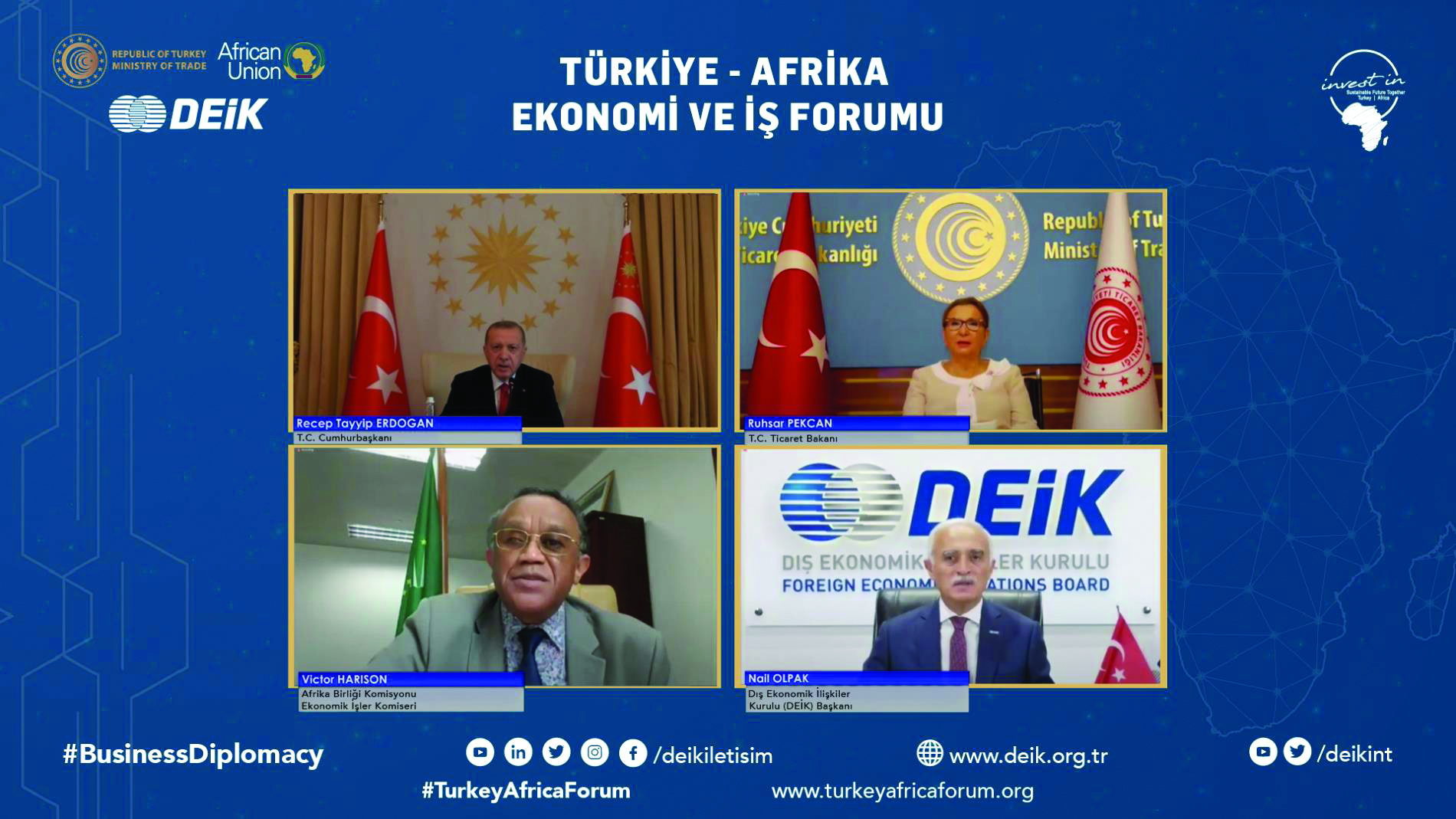 Turkey-Africa Economy and Business Form, organized by DEIK, was virtually held due to the COVID-19 outbreak.

Foreign Economic Relations Board (DEIK) organised a Turkey-Africa Economy and Business Forum in cooperation with the T.R. Ministry of Trade and African Union. Held on a virtual platform on 8-9 October 2020, the event brought together 33 ministers from 80 countries, 2,500 Turkish and African businesspeople, and 45 high-level speakers. 253 sectoral meetings were held in the organisation and nearly 70 thousand people followed the event on social media.

Erdoğan mentioned that they support the debt relief attempts of G20, of which Turkey is a member, towards least developed countries that receive international development aid and said “There are also 46 African states among the countries which we provide medical kits and supplies. We are proud that Turkish respirators, masks, and overalls contribute to Africa’s fight against the virus.”

The Value of Projects Undertaken in Africa is $70 Billion

“The total value of projects undertaken by Turkish companies all across Africa reached $70 billion,” added Recep Tayyip Erdoğan and stated that Turkish companies apply unique models from technology transfer to sharing their knowledge and experience, from capacity investment and increase to common initiatives. “Turkish investors, which meet most of the labour needs within the country, did not fall on the wrong track of exporting workers to the continent, unlike many foreign companies. More than 100,000 African labourers were employed thanks to Turkish investors. We can see that especially our contractors have a particular reputation across the continent. The best example of this is the Dakar Blaise Diagne International Airport that was opened 3 years ago. Being dragged out for eight years by a foreign company, the construction was completed by Turkish contractors within eight months and made available to the Senegalese,” stated Erdoğan.

Our Trade Is Not Only A Commercial Relationship

Minister of Trade Ruhsar Pekcan said that along with paying regard to its trade rights and interests, Turkey also advocates for the least developed countries and other developing countries and added, “As Turkey, we prioritize common benefit, common interest, and win-win principles in our economic relationships with African countries. We do not see our trade with African countries just as a commercial relationship. We care about our trade, Turkish investments across the continent, and the contracting projects of Turkish companies in Africa as a whole, and their contribution to the economies of friendly and sister countries in Africa.”

And Nail Olpak, President of DEIK, stated his belief and confidence in Africa and reminded that African Continental Free Trade Area Agreement would be effective in January 2021, which would make the continent one of the biggest free trade markets in the world. “It is estimated that with this agreement, the trade in the continent can reach up to 50% within four years. As DEIK, we prepared a comprehensive report in collaboration with our Ministry of Trade and Istanbul Commerce University, to analyse the impact of the agreement on Turkey-Africa economic relations and provide more information for Turkish companies on the agreement. Our aim is to develop more investment and collaboration projects including PPP in areas like healthcare, transport, engineering and architecture, banking, production, and industry in which especially information technologies are used,” said Olpak.

Logistic Centres Continue to be Established in Africa

Olpak pointed out the importance of opening mutual representative offices between the African Union and DEIK and added, “One of the main problems of the Turkish private sector in Africa is the financing of the activities. Turk Eximbank extensively supports these activities. Our Ministry of Trade continues to establish logistic centres in Africa. These logistic centre projects are very important in these days in which we talk about supply chains frequently. At times where the importance of information and interaction is increasing, I invite our African friends to benefit more from DEIK’s unique global network.”

Berna Gözbaşı, the Coordinating Chairperson of Turkey-Africa Business Councils also spoke in the forum and said, “Turkey and African countries have been sustaining their economic relations especially in the last 10 years. At the opening of the Turkey-Africa Economy and Business Forum Virtual Platform, our President announced the trade volume goal with the continent as $50 billion. We hold meetings, talks, and organise business forums to develop trade and investment relations and reach this number. We declared this year as the year of Africa with our Ministry of Trade, and we aimed to build a large bridge from Africa to Turkey even in a virtual environment,” she said.

There Was Also A Ministerial Meeting

The forum hosted high-level spokespeople, thematic panels, project presentations (G2B), live mutual business talks (B2) and company and country tables in the virtual exhibition area. There was also a ministerial meeting called “Turkey-Africa: Powerful Partners in the Post-Pandemic World”, where the trade and economy ministers of African countries came together.

“Turkey-Africa Partnership: Economic Recovery Period After COVID-19”, “Turkey’s Fight Against COVID-19 & Healthcare Cooperation with Africa”, “The Effects of African Continental Free Trade Area (AFCFTA) on Trade and Industrialisation”, “Building Economic Resilience in Africa and Turkey As A Partner”, “Press Conference”, “Brainstorming on Investments in the New Normal”, “Turkey-Africa Women Leaders Dialogue”, “Project Introduction Presentations” and the “Closing Sessions” were held in the Forum.

One of the main goals of our expansion policy to Latin America and the Caribbeans is to increase our partnership with the countries in...
Read More

Internationally recognized as one of the world’s most important technology, entrepreneurship and innovation centers, Chile is making the Pacific Alliance more powerful The Pacific...
Read More