As our special moments become immortal through the photographs we capture via our classic cameras, the number of these moments continue to increase thanks to the smartphones we have today…

Almost 15 years have passed since my graduation from the university. During my student life, the number of people who had polyphonic phones able to capture photographs was very low. Even though the captured photographs had no quality, they provided the ease and opportunity to record the moment. The things we call photographs were only captured by means of cameras. The other day, I have compared the photographs taken through the cameras of those days with the photographs taken through the phones we have today. There is no difference anymore, and on top of it, some mobile phones compete with these cameras in terms of their features.

People are conscious of the transience of the life they live. This consciousness makes each moment they breathe precious. These moments are immortalised via photographs. The list of immortalisation gets longer due to thousands of photographs we have in the gallery of our smartphones. I showed my colleague a photograph from the celebration with many people belonging to his birthday 3 years ago and added, “I keep the photos consider special in the storage of the phone and sometimes think of the past as I look at them…”

Without touching upon the aspect that photography is a branchof art by itself, I will share some information on taking photographs in terms of fundamental and practical aspects regardless of the type of the instrument such as mobile phone, tablet, or camera. Photography takes up a large space in every area of our life with its current state. We are able to capture photographs at home, school, offices, metros, cafes, ships, engagement and wedding ceremonies, and anywhere else.

Why not capture better photographs? 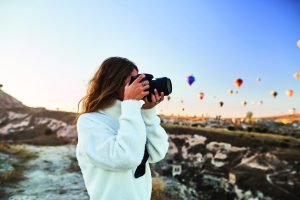 9 ADVICES TO CAPTURE PHOTOGRAPHS IN A PRACTICAL WAY

2. Instead of placing the main object in the photograph right in the middle of the frame, we apply the 1/3 rule that will boost the interest and attention.

3. We can have the object to be captured stand out without compromising on the balance in the frame.

4. The eyes follow the lines in the photograph by themselves. We can try to look at it vertically and horizontally proportionate.

5. We pay attention to the appearance of nature and people in the framing. In case of crowded visuals and photographs of people or living things, we can be mindful of the full appearance of the organs such as heads, arms, and feet.

6. We ensure that the background is clear in the photographs. We avoid complex and unclear backgrounds.

7. In cases where the sunlight is not enough, we can use the flashlight of the camera.

8. We make sure that the photographs are not unsharp.

9. The level of perspective depends on the improvement of the eye. Do not hesitate to try to improve your perspective.

Türkiye and Uzbekistan have really strong ties both in terms of culture and economy.  Especially in the last five years, we have achieved effective...
Read More