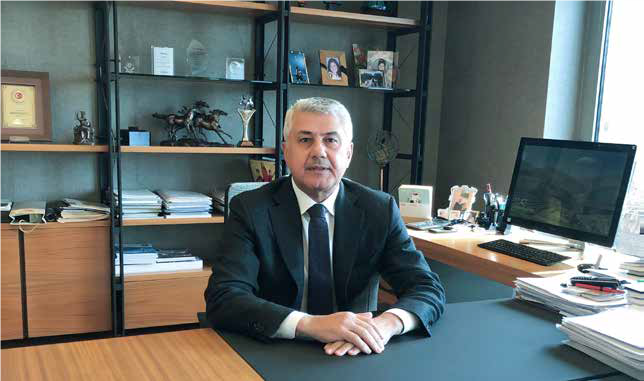 Tevfik Öz, Chairperson of DEİK/Türkiye-United Arab Emirates Business Council, elaborated on the economic relations between Türkiye and the UAE, and DEİK’s activities for Business Diplomacy readers.

1- How do you elaborate on the trade relationship between Türkiye and the United Arab Emirates in terms of import and export figures?

While Türkiye was a net exporter in its bilateral trade with the UAE between 2014-2017, it became a net importer in 2018-2020. According to the trade data for 2020, the export volume decreased by 22% compared to the previous year, while the import volume increased by 30%. Lastly, in the January-August period of 2021, exports increased by 1.2% compared to the same period of the previous year, reaching USD 3.6 billion, and imports decreased by 0.4%, decreasing to USD 1.6 billion. According to 2020 data, gold and jewellery, automotive, machinery, and electrical devices stand out in exports.

Considering the sectoral analysis of the trade relations of the two countries and the potential volume behind the targets, it is seen that there are great export potentials that cannot be made use of in the sectors of clothing, machinery and electrical products, motor vehicles, food, fruit, and plastic, especially in gold and jewellery sectors, which will raise the current exports level. As a result of the developments in political relations, we can predict that the Türkiye-UAE trade volume will increase in the upcoming period and that the export capacities that promise potential for the Turkish private sector will be able to reach the targeted level through a focus on the target sectors.

2- The visit of Recep Tayyip Erdoğan, President of the Republic of Türkiye, to UAE was expected to create an opportunity for new investments. Subsequently, 13 agreements were signed with UAE in areas such as defence industry, healthcare, climate change, technology, culture, trade, economy, and communication. What are your comments on this development?

These agreements should be evaluated on the basis of mutual benefit and the economic development visions of both countries. Which sectors have more potential in terms of trade and investment in the “Plan Abu Dhabi 2030” of the UAE should also be mentioned as this is important for understanding the strategy behind the agreements. The main sectors that are planned to be given priority in the development process are aviation and space, information technologies, renewable energy, transportation, tourism, health and export-oriented industry, and petrochemistry. We see that the 13 agreements concluded cover these sectors. On the other hand, these are sectors in which Türkiye has made great progress in recent years, whose development is given great importance for the upcoming period. The agreements will also positively contribute to the current commercial activities and investments of Turkish companies operating in these fields, together with the mutual agreements signed with the UAE. Likewise, it is expected that the investments of UAE companies in Türkiye will substantially increase.

3- What would you say if we look at the trade effects of Türkiye’s diplomatic charge on the United Arab Emirates, Saudi Arabia, Egypt, and Armenia from the perspective of the future?

I would like to answer this question specifically for the United Arab Emirates as I have more information on this country. The process of political rapprochement with the United Arab Emirates, which started in August 2021, gained momentum in a short time with the visits of Ministers and Heads of State. As a result of the visit of Bin Zayed, the Crown Prince of the UAE, to our country and our President’s visit to the UAE, the rapprochement process became institutionalized and the signed agreements opened new doors for Turkish business people to increase bilateral trade volume and investments. In the upcoming period, I believe that the relations between the two countries will be carried forward, resulting in positive reflections on the trade figures.

4- As the Foreign Economic Relations Board (DEİK) Türkiye-United Arab Emirates Business Council, you carry out many activities aimed at the development of trade between the two countries. Could you tell us about these activities? How do you elaborate on the importance of DEİK in this context?

In 2021, as the political relations between the two countries gained positive momentum, as DEİK/Türkiye-United Arab Emirates Business Council, we contacted our Counterpart Organization, the UAE Federation of the Chambers of Commerce and Industry, and organized a delegation visit to Dubai. During this visit, the sincere welcome shown by our UAE counterparts and the intense desire to increase cooperation became a source of motivation for our future activities. Afterwards, on the occasion of the Türkiye-UAE JEC Meeting on November 23, we held a UAE-Türkiye Business Forum in Dubai with the participation of Mehmet Muş, Minister of Trade of the Republic of Türkiye. This Business Forum was held with the participation of approximately 250 businesspeople from both countries and was a significant step for the bilateral trade volume that we believe to increase in the upcoming period. After about 10 years, it has special importance as it is the first Business Forum organized by Türkiye in the UAE. In the new period, we plan to maintain mutual delegation visits and organize a Business Forum in Istanbul.

Are We Well-Prepared for the Period of African Continental Free Trade Area?

Is “Single Africa” possible? Having fought for development in difficult conditions for years, African countries are looking for ways out with the pressure of...
Read More

Our Students From Abroad Are Our Most Important Guests