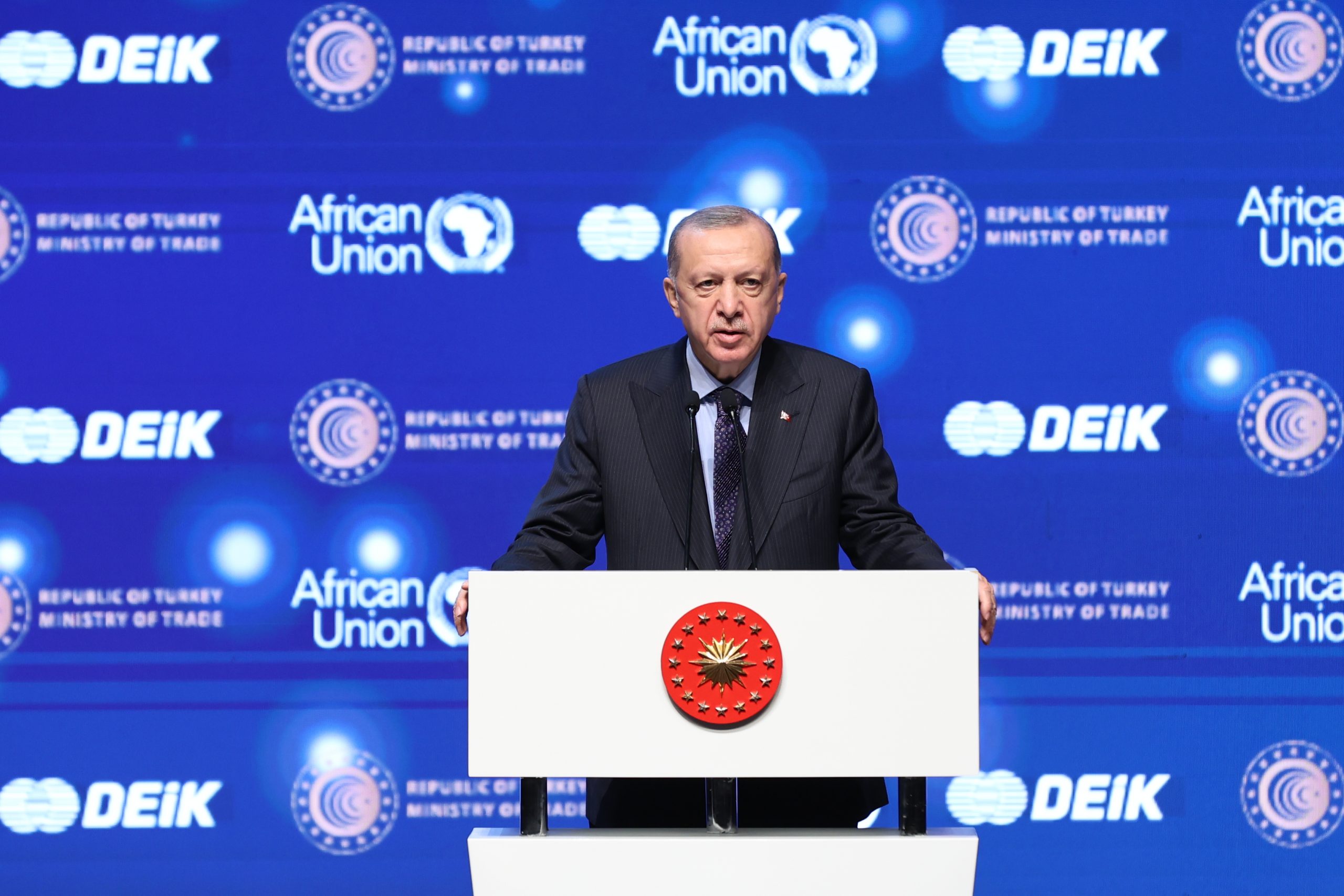 The Türkiye-Africa III. Economic and Business Forum was attended by 35 Ministers, 6 Deputy Ministers, and over 3,000 businesspeople from 45 countries

The third of the Türkiye-Africa Economic and Business Forum, held with the cooperation of the African Union and the organization of the Foreign Economic Relations Board (DEİK) under the auspices of the Ministry of Trade of the Republic of Turkey every two years since 2016 in order to develop cooperation between Türkiye and African countries and to evaluate opportunities, was held at the Istanbul Congress Center between October 21-22, 2021.

In addition to the press conference held with the participation of the ministers, the Türkiye-Africa Leadership Dialogue panel organized with the participation of Emine Erdoğan, wife of President Recep Tayyip Erdoğan, and Denise Nyakeru Tshisekedi Tshilombo, First Lady of the Democratic Republic of the Congo, 8 panels, 4,900 bilateral business meetings (B2B) and 2 G2B sessions, where trade, investment, corporation opportunities, and target sectors in Africa were discussed, were held. In addition, at the press conference held on the first day of the forum, a joint communique was published stating the aim of strengthening the permanent partnership between Türkiye and Africa for development and economic integration.

Speaking at the end of the Türkiye-Africa III. Economic and Business Forum, President Recep Tayyip Erdoğan said, “In the sessions held for two days, mutual investment opportunities in many fields from energy to agriculture, from health to banking system and innovation were discussed. Policy suggestions that will trigger the potential between Türkiye and the African countries were shared by the competent persons participating in the forum. In addition to the strengths of our cooperation, the topics that we should work on together were also discussed and evaluated within the framework of the forum. I believe that the issues raised here will guide us in our efforts in strengthening our relations with the continent.” Emphasizing that Türkiye-Africa relations are getting stronger day by day on the basis of equal partnership and win-win, President Recep Tayyip Erdoğan drew attention to the fact that Turkish contractors underlie many investments in Africa, from airports to ports, from public buildings to roads and tunnels. Stating that Turkish companies have undertaken over 1,150 projects with a total value of over USD 70 billion across the continent, President Erdoğan said, “The value of our continent-wide investments has exceeded USD 6 billion. Our total trade volume with the region increased from USD 5.4 billion in 2003 to USD 25.3 billion at the end of 2020. Our goal is to increase this volume to USD 50 billion and then to USD 75 billion. I believe that we will achieve these goals through cooperation.

ERDOĞAN: “WE WILL PROVIDE VACCINE AID TO AFRICAN COUNTRIES”

Explaining that under the leadership of Türkiye, they will also provide vaccine aid to the countries of the continent together with the members of the Turkic Council, Erdoğan said, “There are also 44 African countries among the states to which we provided medical equipment and material support during the pandemic. We are pleased to see the contributions of our domestic and national respirators, masks, and overalls to Africa’s combat against the virus.

Hopefully, with the introduction of our TURKOVAC vaccine  after the approval stages, we will demonstrate an exemplary attitude in the vaccine issue.”

DR. MEHMET MUŞ: “WE WILL CONTINUE TO INCREASE THE ACCELERATION OF TURKEY-AFRICA RELATIONS”

Stating that as Türkiye, they are aware of the potential and the story of change in Africa, Dr. Mehmet Muş, Minister of Trade of the Republic of Türkiye, said, “In this context, Türkiye’s Africa policy is shaped by a humanitarian approach that aims at the development of the continent instead of prioritizing economic opportunities, unlike other actors oriented to the region today. For us, Africa does not mean oil, diamonds, gold, iron, copper, and silver, but friendship, fellowship, partnership, and gaining together.”

Underlining that as of the first 9 months of this year, they have achieved a trade volume of USD 20.7 billion with an increase of 27.2 percent compared to the same period of the previous year. Mehmet Muş said, “Having implemented successful projects in many parts of the world, Turkish contractors have made a significant contribution to the development of Africa through 1,683 projects worth approximately USD 77 billion. In the light of all this information, we observe that Türkiye-Africa relations have gained momentum. We are determined to maintain this momentum by increasing it even more. Together with our private sector, we will continue to provide all kinds of support to the development of Africa. Africa will gain, and we will gain together with Africa.”

ALBERT MUCHANGA: “WE ARE STRONGER TOGETHER”

Albert Muchanga, African Union Commission (AUC) Commissioner for Economic Development, Trade, Industry and Mining, also stated that successful business meetings were held at the public and private sector level for two days. Noting that 1.3 billion people live on the African continent and this number is going to reach 1.7 billion in a short time, Albert Muchanga said, “The activities on quality infrastructure and digitalization make Africa attractive in the field of investment and trade. We want Turkish investors to benefit from these fields. There are investment opportunities in many different sectors such as the transition to the green economy, manufacturing, transportation, logistics, education, health, construction, and medical tourism. We wish to increase industrialization by making progress in these sectors together. We wish to provide employment to our people in all our countries. We are stronger together.”

Our Core Principle Is To AddValue To The Human Life

he Pacific Alliance, which consists of Mexico, Peru, Colombia, and Chile and which stands for the eighth largest global economy, has become an organization...
Read More

I opine that having Istanbul Financial Center further developed and made more operationally efficient can ease up trilateral dialogue and co-operation Turkish global firms...
Read More