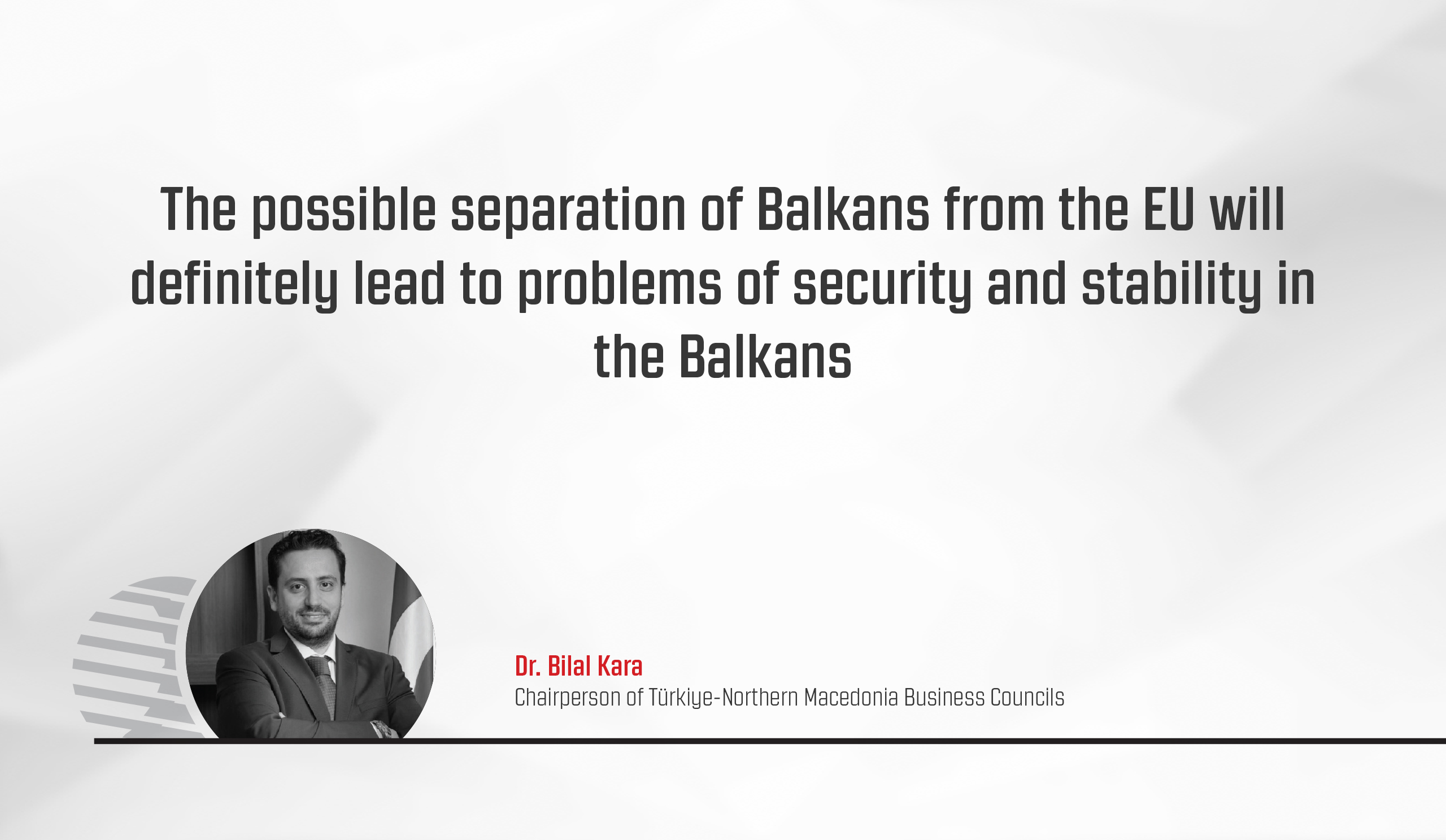 Just like many other countries, Balkans confronted a vital dilemma since the beginning of the COVID-19 pandemic. Political leaders chose to take the pandemic under control with heavy isolation and quarantine measures, sacrificing the economic balances in this regard in order to prevent the outbreak from growing into a bigger problem. Activities in factories, workplaces, and malls came to a halt, all borders were closed to passenger traffic and public transport was stopped. In short, social and commercial lives were significantly paralyzed.

A Support Was Expected for Balkans

Both governments and the people knew that the fragile and foreign-dependent Balkan economies would not endure much longer and there would be devastating economic results after this period. However, “Brothers in Europe” were expected not to let the Balkan countries alone in these challenging days and support their neighbours in a medical and possibly a financial crisis.

However, reality did not match up to the expectations. Let alone helping other countries, European countries could not even show a sense of unity among themselves since the beginning of the pandemic. At first, these countries did no more than providing a 370-million euros support package for the Balkans. Considering that the foreign trade deficit of only North Macedonia at the end of 2020 was twice this figure, it was obvious how beneficial this package could really be for these countries.

Balkan Leaders Criticised the EU in Their Speeches

All these naturally led to a disappointment in Balkan countries who regarded Europe and the EU as a strategical partner and that sense of disappointment was reflected in the statements of Balkan leaders. First, Bulgarian Prime Minister Bojko Borisov said Bulgaria did not receive any support from Europe in this process and the Minister of Defence Krasimir Karakachanov said, “China and Turkey supported Bulgaria while Europe didn’t even send any masks. Apparently, it is the nation-states that the EU is trying to overthrow, rather than the expensive European bureaucracy, working for the benefit of the people.” At a ceremony in which China provided 5 million masks to Serbia, the country’s President Vucic said, “This is the real solidarity, the EU’s support promises remained only on paper.” And Albanian Prime Minister Edi Rama said on a TV show he attended that the EU turned its back on Albania during the COVID-19 process and reflected the reproachful attitude of the Balkan people. On top of all this, the EU’s credibility really suffered when the Union banned the export of medical equipment and materials to non-EU countries and also including the Western Balkan countries into this ban.

What will be the process in the upcoming period? This is closely related to how the EU will position Balkans in the normalization strategies. According to diplomacy experts, the pandemic process will bring about new and smaller alliances in Europe other than the EU, and the concepts of nation-state and egocentrism will stand out more. It is certain that Brussels will have difficulty in clarifying the Balkan situation in this period when the Union itself or even its existence will be questioned.

On the other hand, Europe will have to face economic recession and unemployment issues in the post-quarantine period. For example, as the number of unemployed registered in Austria was 200,000, it reached 400,000 in the first two weeks of the pandemic. Again, social traumas caused by economy and unemployment as well as health infrastructure failures in the pandemic period in other member states seem to keep the EU busy for a long time. With these issues waiting to be solved, would the EU concentrate on the economic and political reform processes in the Balkans and the solutions to the possible financial crises? More importantly, we will see how the EU’s expansionist policy in Western Balkans that stirred up when Albania and North Macedonia were given the candidate country statuses will take shape, or will the EU be as keen on negotiating with new candidate countries or will it extend it over time and try to gain some more time.

The “Western Balkan Summit” meeting was held under the organization of the European Commission in recent weeks, where all EU member states and Balkan leaders came together online. In the meeting, Ursula Von Der Leyen, the President of the EU Commission made an assertive speech and said, “Balkans belong in the EU,” in a way to atone for the countries. She also announced that Balkan countries would receive a new support package in the upcoming periods.

However, Balkan countries do not want to wait for more.  According to the report published by the IMF’s own data, Balkan countries are expected to receive much more serious economic damage in 2020 than the 2008 crisis. It is estimated that the service sector-based Balkan economies will contract by 3 to 10 per cent in this period. And with an economy based largely on tourism, Greece will experience the biggest contraction, followed by Croatia, Montenegro, and Albania. There is a chance that this scenario will get even worse with the “Second Wave COVID-19” outbreak, which can reappear in autumn according to scientists. If you remember the economic crisis in Greece in 2014-2015 and the chaos in the streets of Athens and the indifference of Brussels in those years, such a view does not seem unlikely in the Balkans for now. In fact, Slovenian Prime Minister Janez Jansa recently announced that the pandemic state was “officially” lifted and warned that “the economic crisis will come after the health crisis and all citizens should be prepared for that”.

Used to emphasize the region’s ethnic conflict and instability in the social sciences, the term “Balkanisation” refers to the ongoing social and political conflict situation in the region. In order to stay away from the chaotic environment and to achieve political, social and economic stability, it was understandable and reasonable that Balkans set all their foreign policy goals on integration with the EU-Atlantic institutions since the Thessaloniki Summit in June 2003. Without doubt, theoretically and practically, the EU had a high potential to bring such harmony to the Balkans based on peace and justice. On the other hand, it was obvious that the EU was interested in the Balkans, and in fact, tried to be as active as possible in the region. The stability and security in the Balkans as the connection route of Europe with Asia also meant the internal stability and security of Europe. While the EU’s planned steps moved the region away from the influence of other countries; its financial, social, political, and indirect military supports also caused many unexpected developments in the region in the last 20 years.

The EU’s Challenges in the 21st Century

The pandemic process made it difficult for a partnership between the EU and the Balkans. The negative effects of the 2008 global crisis in the Eurozone, terrorist attacks in London, Madrid, Paris and Brussels, the Arab Spring and the following irregular migration and refugee problems, and finally Brexit process were among many challenges that the EU faced while entering the 21st century. But none of them turned into a complicated and global problem that had both political, economic, and social consequences at the same time as COVID-19. However, this situation is of vital importance so as not to interrupt the solidarity between the Balkans and the EU and to maintain the achievements so far.

It is certain that upon Balkans’ possible separation from the EU, there will be many new security and stability issues in the Balkans as Europe’s door to the East, and the EU members will be the first ones to be affected. In a reverse scenario, the Balkans can become an important link in the supply chain of Europe’s agriculture, food and even industry, which will be reshaped after the pandemic, with its geographical advantage. Instead of a “one-sided, interest-oriented relation”, “a partnership based on a long-term win-win approach” can ensure general stability in the region and increase the socio-economical welfare by accelerating the growth.

We Are Trying to Turn the Crisis into An Opportunity

he Pacific Alliance, which consists of Mexico, Peru, Colombia, and Chile and which stands for the eighth largest global economy, has become an organization...
Read More

With the decline in oil prices, the appreciation of the dollar and the influence of trade wars, the world trade experienced a decline in...
Read More

Will the Trade Wars Win or Will China?

The depreciation of the Yuan can increase risks in the Chinese economy as it reduces both domestic demand and foreign direct investments The appreciation...
Read More