Tourists know Turkey’s Antalya province for its beautiful Mediterranean resorts, but coastal tourism isn’t the only major contributor to the region’s economy. Further inland, farming takes over as the dominant source of revenue and serves as the backbone for rural Turkey.

Turkey is home to nearly three million farms, the majority of which are family operated. Turkey is the world’s seventh largest agricultural producer overall, and a top exporter of hazelnuts, chestnuts, apricots, cherries, figs, and olives. Nearly one quarter of the country’s workforce participate in the agricultural sector.

The images show two important agricultural districts of the Antalya province as they appeared on June 8, 2020, to the Operational Land Imager (OLI) on Landsat 8. Crop production in Antalya is valued around $270 million. 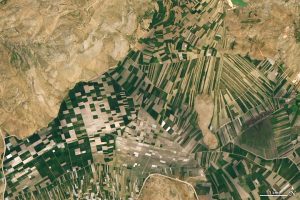 The first image shows farms in the district of Elmalı, where the town of the same name sits at the top of a long upland valley. Elmalı, which means “apple,” produces around 12 percent of Turkey’s apples, as well as the local chickpea snack leblebi. The second image shows a portion of the district Korkuteli, where farmers plant grains and oil seeds.

The arrangement of the farms conforms to the terrain of the Antalya province, which is largely mountainous. Drawing the northern border of Antalya, the Taurus Mountains cut across the province in the east to west direction in an arc. Elmalı and Korkuteli are located in the Bey Dağları mountains, the western range of the Taurus Mountains. More than two million people live in villages located within the Taurus Mountains and rely on farming as their major source of income. Because of the terrain, farms are typically small (about 4 hectares or 10 acres).

We Need To Start Plannıng Our Future