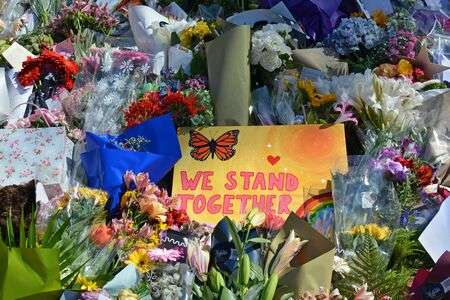 The massacre of Muslims in Christchurch, normally a quiet city on the other end of the world from Turkey which took place in NewZealand on the 15th of March, Friday turned the whole world’s attention suddenly to this region. The killer, 28-year-old Brenton Tarrant, carried out a massacre against Muslims during Friday prayer, killing 50 people worshipping at El Nur Mosque and wounding at least 50 others. This massacre actually manifests that it is part of a global Islam hatred ecosystem rather than specific to the New Zealand platform which continues to strengthen especially in Western countries and that states refrain from taking adequate and effective measures in this regard. The ‘manifesto’ by the Christchurch killer ‘Great Replacement’ and the writing on the murder weapons immediately brought to mind Anders Breivik, who killed 77 people in Norway in 2011. Breivik stated that even though he had not discriminated in terms of whether the 77 people he murdered were Muslim or not, like Tarrant he issued a manifesto saying that he was ‘punishing’the Christian West for failing to see the ”danger of approaching Islam’ and taking necessary measures.

A review of these incidents in New Zealand, Norway and other places indicates that a global Islamophobia ecosystem which has been observed for some time with concern is gaining strength and generating its own deadly rhetoric. A source of even more concern is that like in the US, some politicians leading their countries fail to take a stance against this rising animosity against Muslims and even become a part of this hate network from time to time for the sake of political populism.

One of the main pillars of the ecosystem of fear and hate are generated conspiracy fallacies. For example, it is clear that the main point of Tarrant’s manifesto, who carried out the New Zealand massacre, was the ’great replacement’ nonsense. Accordingly, as a result of migration and high birth rates, Muslims will constitute a majority in Western countries and this will be the end of Western civilization. This Islamophobic sector, which aims to create fear and concern in Western societies with lies and conspiratorial approaches that Muslims are infiltrating the institutions of Western countries lies, slanders, distorts very comprehensively and effectively. It is evident that Tarrant and other racist, xenophobic, anti-Islamic, ‘white supremacists’ feed from a common ‘ideological’ pool. French author Renaud Camus is known as the mastermind of the ‘great replacement’ nonsense that is the essence of the written manifestos. According to the allegations of Camus in “le grand replacement” the Western world is in the process of ‘reverse colonization’ by Muslims. Although Camus was charged and convicted for hate crimes in 2014 this punishment did not prevent him from spreading his ideas. Camus and his peers, using Muslim prejudices already existing in Western society, frequently endeavor to spread this false and distorted information to theb Western society in a sensational manner. The claim that Muslims will ‘invade’ the West because of immigration and their high birth rate is actually based on a false prejudice that exists in Western societies. A study by Ipsos Mori in 2016 shows that people in the West estimate their Muslim rates to be much higher than they actually are. For example, according to Pew Research, in 2010, about 7.5 percent of the French people were Muslims, however this figure was estimated to be 31 percent by French citizens. Although this ratio was scientifically calculated as 8.3 percent in 2020, the idea that the French population living in 2020 would constitute 40 percent of France shows the extent of this prejudice. This applies not only to France, but also to countries such as Germany, Italy and Belgium.

The conspiracies that demonize Muslims are not limited to only written works. The ‘Great displacement claim of Camus that we mentioned above is popularized in various compilations. For example, the ideas of the “white supremacists” which is expressed as ‘sub-right’ and the anti-immigrant Canadian Lauren Southern have reached millions of viewers on YouTube with ‘great replacement’ titled broadcasts. There are numerous organizations, institutions and agencies in the Western world based on anti-Muslimism. While such institutions suggest that Islamic values are the biggest threat to the United States, they also serve the conspiratorial approaches we have mentioned. The Norwegian mass murderer of 2011 mentions Jihad Watch website in his manifesto 64 times. In terms of the United States, it is worrying that some of the anti-Muslim opponents mentioned above as well as others are deputized in influential organs of government.

A look at the history of Islamophobia in the Western world, it is obvious that the whole history is seen as a struggle between the ‘Crescent and Cross’ and therefore there is an inherent Turkophobia in Islamophobia. When we look at the messages written by Tarrant in the aftermath of the New Zealand massacre and the messages written on the massacre weapons, it is evident that the anti-Muslimism and hatred that we know as Islamophobia is historically oriented towards Turks. It is notable that a significant number of the 47 names written on the massacre weapons are aimed at Ottoman Turkish history. Historical names such as Dimitri Senyavin, Serban Cantacuzino, Stefan Lazarevich, Edward Codringon, Prince Fruzhin, Iosif Gurko and John Hunyadi written on the firearms are people who have fought directly against the Ottoman State. It is also noteworthy that the 1683 Vienna Siege has been involved in such manifestations in a special way. For example, Breivik, the Norwegian mass murderer who asserted that the West had surrendered to Muslims with ”tales” of ‘multiculturalism’ refers to 1683 in his manifesto titled 2083 Declaration of European Independence, which has started to be popular among racists, anti-Muslims, “White supremacists” and xenophobes as ‘liberation’ after 400 years.

Turkey And Building The Space Ecosystem

The space industry is regarded as a strategic field for including the satellite programs that highly concern the national security of countries. Since the...
Read More

We talked to Mustafa Tuzcu, Deputy Minister of Trade, about the European Green Deal and its opportunities and possible impacts on our industry “It...
Read More

In the construction of earthquakeresistant buildings, the selection of the residential area, the building foundation system, the use of materials in accordance with the...
Read More